LabVIEW Build Support makes it possible to invoke builds across different targets and in a user-specified order.

The LabVIEW Build Support adds the possibility to invoke builds across different targets and in a user specified order.

In LabVIEW 2010 and later it is also possible to have FPGA build items specified in the build order, meaning that Windows/RealTime applications depending on FPGA builds, can be built with a single build action.

As an additional feature, it is also possible to easily create a zipped project development distribution (including the project file itself), not including the Program folder items.

– LabVIEW project integration
– Quick export of project to zip file (including the project file itself)
– Executing builds on different targets with one single menu selection
– In LabVIEW > 2010; even on FPGA targets
– Project defined build order
– Build all build specifications in human sorted order (regardless of saved order)
– User defined handling of build error, either stop on error or continue building
– Option to save project before a build specification is invoke

– Supports  any build item in LabVIEW >2009
– FPGA builds in LabVIEW >2010
– Integrated in the LabVIEW project environment, no external file necessary to define the build order.
– Build order defined by drag and drop. 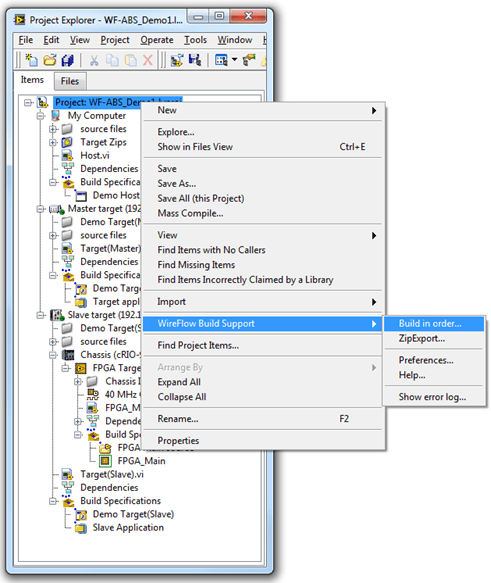 Demonstrates the basic usage of the WireFlow Application Builder support add-on for LabVIEW.